Although it took a quarter or two to find it’s rhythm, the Pittsburgh Panthers offense picked right back up against FIU on Saturday. One takeaway from the game, aside from a 3-0 start, was the continued emergence of James Conner. He continues to be ignored by the national media, as they focus their attention on the likes of Marcus Mariota and Todd Gurley. Playing on ranked teams will bring that type of hype and exposure. But while everyone else chooses to focus on them, James Conner is quietly building himself a Heisman-caliber resume. 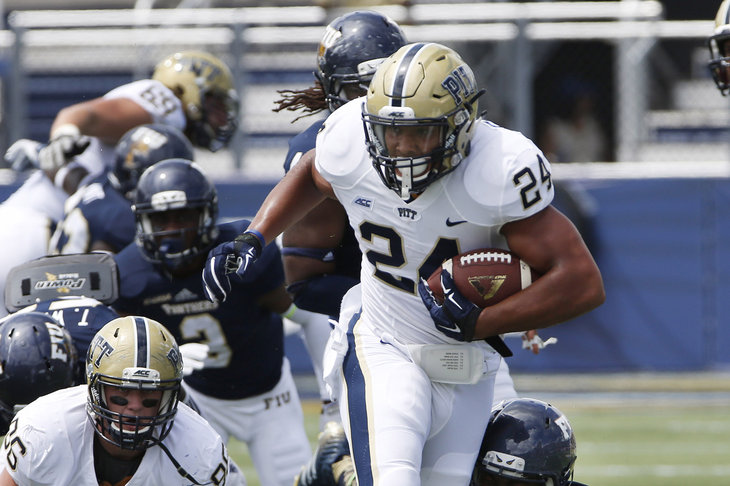 First, it should be noted that it has been increasingly difficult for a running back to win the Heisman trophy, regardless of numbers. Second, it’s too early for Heisman hype, but it’s happening anyway. Now, only three times since the 1999 season has a ball carrier walked away with college football’s highest honor. The latest runner to win was Mark Ingram in 2009 with Alabama. Through his first three games he totaled 297 rushing yards with 120 yards receiving, finding the end zone 5 times. He would finish the season with 20 touchdowns and 1,992 total yards while averaging 6.1 yards per carry. The significance of these numbers in relation to Conner becomes clear as day when Conner’s first three games are examined. 543 rushing yards and 8 touchdowns with an average 6.8 yards per carry. He has run for over 100 yards in each game, eclipsing 200 yards in his performance against Boston College. In comparison to recent Heisman finalists, Conner’s start looks like the beginning of something exciting. Tre Mason of Auburn, a finalist last season, didn’t rush for 100 yards until the fourth week of the season. However, he finished his campaign with an incredible push, rushing for more than 100 yards in his last six games, including a 304-yard day against Missouri in the SEC Championship Game.

Andre Williams, playing for Boston College last season, put up similar numbers in his first few starts. He continued to rush for ridiculous numbers all season, putting up five games with over 200 yards on the ground. If Conner can stay strong and keep up his torrid pace, he could find himself in the running for this prestigious hardware as well as with a few more eyes on him as Pitt moves back into the national spotlight. Pitt’s backfield is something to keep watching; and while it’s still early, this season is shaping up to be a special one.