With the Cochran era over now and another beginning next fall, I thought I would share my top ten quarterbacks to sport the red and black. Since the program’s inception in 1982, VSU has produced a plethora of talented leaders behind center. The position has garnered 3 Harlon Hill trophies, national championship winners, and All-Americans. I based my selection off four key areas: statistics, historical significance, talent and success. Whenever anyone makes a ‘top ten’ list, it’s always subject to altercation. So let me say remind you that this was complied through a combination of facts and of course, my subjunctive opinion. Prior and post accolades were considered, but this list reflects the quarterbacks’ careers primarily as a Blazer.  So without further ado, here are my top ten VSU shot-callers.

First of all, any quarterback that brings a title to Valdosta State must be taken into consideration. Walker was only around for the 2004 season but boy was it special. In his lone season, he threw for over 3,000 yards and tallied 23 touchdowns. VSU’s offense averaged 416 yards and 35 points that year en route to the program’s first national championship. The Florida State transfer was one of the most instinctive players to ever suit up for the Blazers which made him a joy to watch. Walker was the starting quarterback for the Seminoles in the 2003 Sugar Bowl.
9. Kellen Lewis
Reign: 2009 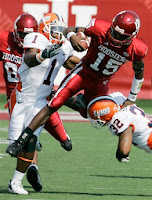 He could do it with his accurate arm or overwhelming speed. The All-Big Ten selectee was a star for the Hoosier for three seasons. Lewis set16 school records at Indiana. He still holds the single-season passing yardage and percentage records along with career completions, and is second behind Antawn Randle El for career total offensive yards.Unfortunately, off-the-field issues led to his dismissal from the team prior to his senior season. He subsequently transferred to VSU after hearing about the school from a former teammate. Fortunately for the Blazers, the ensuing season he anchored an exciting offense that was ranked 12th in the nation in highest total offense. He finished with 14 touchdowns in 2009 but the Blazers failed to make the playoffs after going 6-4.
8. Tye Cottle
Reign: 1987-90
The program’s first coach Jim Goodman lasted three seasons before VSC hired coach Mike Cavan. Cavan decided to name a freshman, who starred at Tift County prior, as his starting quarterback. Cavan assembled an effective tandem with quarterback Tye Cottle and All-American wide receiver Randy Fisher that opponents struggled to disrupt. Cottle started all four seasons and led the team to winning seasons in his first two. His senior year he led the GSC in passing yards. He is sixth all-time on VSU’s career passing yards (5,593) and seventh in completions (427). 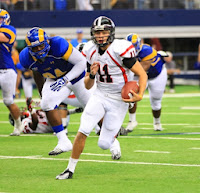 Reign: 2011-13
Cayden Cochran comes in at No.7 on this list. Two of his three seasons as a Blazer were injury-plagued and displeasing.  Both those seasons (2011, 2013) resulted in missing the playoffs. Nonetheless, in 2012, things couldn’t have turned out any better for the Oklahoma transfer.  Cochran was ranked 19th in the nation in passing efficiency last year. And efficient he was. The All-GSC selectee completed 64 percent of his passes and 26 of his 46 total career touchdowns were celebrated on the way to coach Dean’s first championship title won with his own groomed players. Cochran ends his career seventh in career passing yards (5,191) and sixth in career passing touchdowns (46).
6. Willie Copeland
Reign: 2006-08 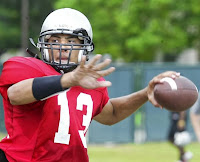 After a fruitful career at Fort Valley State, transfer Willie Copeland arrived at camp in 2006 in middle of a heated quarterback battle. Once Coach Hatcher fell in love with Copeland’s pocket feet and the ability to learn his system quickly – the decision was made. Copeland beat out veteran Barrett Wilkes for the starting job. Wilkes was apart of the 2002 runner-up squad and led VSU to a 9-3 record in 2005. To say the least, Willie was damn good. Copeland averaged 266 passing yards a game his first season at VSU, which was good for sixth in the nation. Copeland, a Colorado Ice quarterback today, finished fifth in career total offensive yards (5,823) and fourth in career passing touchdowns (44). Like Fabian Walker, Copeland earned a national championship title in his final game. 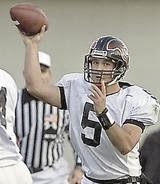 5. Buster Faulkner
Reign: 2001-03
No other walk-on has had more significance on the program than Buster Faulkner. He stepped foot on campus and quickly made a name for himself. His freshman year he was back-up quarterback to Dusty Bonner. The Blazers didn’t lose a step when Faulkner replaced him the following season. The second quarterback of the Hatcher regime led the Blazers to a 14-0 record before a 31-24 loss to Grand Valley State in the title game.Faulkner threw just shy of 4,000 yards and accounted for 41 touchdowns that year. He loss the starting job to emerging redshirt freshman Barrett Wilkes the next season. Faulkner would likely rise on my list if wasn’t ousted during the 2003 pre-season. He transferred to Texas A&M Commerce his senior year (where he broke several records). Both Bonner and Faulkner were successful operating under the infamous ‘Hatch Attack’.
4. Barrett Wilkes
Reign: 2002-2007
Coach Hatcher yet again found a new engineer for his offense – this time his guy was a local name. The Valdosta native still holds the Lowndes career touchdowns record. Wilkes beat out presumed starter Faulker for the starting quarterback job after studying him as backup in 2002. And he didn’t make his coach regret his decision. Wilkes threw for 3, 269 yards and 26 touchdowns. His efforts were good enough to lead the Blazers to their fourth-straight 10 win season (10-2) all under Hatcher’s tutelage.  Wilkes took a redshirt after an impressive sophomore season to nurse a sore shoulder and to make room for FSU transfer Fabian Walker. Wilkes re-earned his starting spot coming off his redshirt season but loss in the NCAA playoffs his junior year (Willie Copeland won the starter duties Wilkes’s senior year). Wilkes spent two seasons as the starting quarterback for VSU and recorded 6,296 passing yards, fourth-most in school history and fourth in career total offense yards (6,333). He played on teams that advanced to four postseason appearances.
3. Lance Funderburk
Reign: 1992-96

The 6’5 good ole Christian boy from Blackshear, Ga is shining product of the coveted Air Raid offense directed by one of its pioneer’s coach Hal Mumme. Mumme is responsible for giving the Blazers their first taste of success. VSU made the playoffs for the first time in 1994 with Hatcher as quarterback. Funderburk surely followed Hatcher’s efforts once he graduated. Funderburk’s senior season was capped off with the program’s second playoff appearance. That season he threw for a VSU record 4,226 passing yards with 38 touchdowns. He still holds the record for single-season passing yards and total offense. The 1996 Harlon Hill runner up had an outstanding career at VSU that was topped with the program’s first ever Gulf South Conference title. A career so remarkable that Funderburk was honored as the first Division II player to participate in the East vs. West Shrine game, a contest that features the nation’s best.
2. Dusty Bonner
Reign: 2000-2001

Dusty always wanted to play SEC ball so he accepted his only offer from the conference – he signed to Kentucky. Coach Mumme (then UK head coach) gave the former Valdosta Wildcat a shot behind center once Tim Couch left for the NFL. During the 1999 season, Bonner threw for 3,266 yards and 26 touchdowns. In 12 starts at UK, he led the SEC with a 137.0 quarterback efficiency rating. After a controversial decision to start Jared Lorenzen over Bonner in the summer of 2000, Bonner took his talents elsewhere. That elsewhere was a future powerhouse near his childhood home in Valdosta. The former VHS Wildcat had a hell of a homecoming too. Bonner reunited with former UK quarterbacks coach Chris Hatcher and won back-to-back Harlon Hill trophies in his two only seasons (the only QB to do so), amassing 8, 163 passing yards and 107 touchdowns (second all-time highest). He currently holds the Blazer score record for passing yards in a game, touchdowns thrown in a game, and total offense in a game. Bonner failing to make a deep playoff run, considering the talent around him, was the deciding factor that landed him at No.2. One thing is certain though, Coach Hatcher’s promotion couldn’t have come at a better time for Blazer Nation.
1. Chris Hatcher
Reign: 1991-94
No surprise here. Chris Hatcher reached Division II highest levels as a player then later as a coach. He forever goes down as one of the most prolific passers in college football history. It’s hard to say this would be possible without the direction of Hal Mumme. Hatcher’s passing attempts doubled when coach Mumme replaced coach Carvan in 1992. Mumme taught and administered a system that Hatcher soon thrived in. Coach Mumme’s first season was spent adjusting, polishing the blemishes in the scheme, VSC finished 5-4. However, the next season, everything clicked. Hatcher’s stellar play during his upperclassmen years lifted the Blazers to the national spotlight. At career end, Hatcher set 29 VSU passing and total offense records. He broke Doug Williams’s Division II career touchdowns record and also set 10 national career records.Mr. Hatcher, in my opinion, is the founding father of Blazer quarterbacks. I say this not because he led VSU to its first playoff appearance nor because he was a Harlon Hill winner, but mainly because his career passing touchdown (121) and yardage (11, 363) records are untouchable.
Posted 2 weeks ago by Eric Jackson
Share. Facebook Twitter Pinterest LinkedIn Tumblr Email