Second ranked West Georgia has accomplished a lot in the 2015 season, particularly in the last two weeks. The Wolves have put up an astounding 88 points in their last two victories, while only allowing 14. The first win came in UWG’s homecoming game, where they defeated the Panthers of Clarke-Atlanta 56-0. Last Saturday, West Georgia rolled over an undefeated, nationally-ranked West Alabama team on the road 32-14. This win is more notable for the Wolves for quite a few reasons. The first reason is that this win gives UWG a 1-0 record in the Gulf South Conference, and a 5-0 record on the year. The second reason is that this was Coach Will Hall’s first return to his previous school, where he had a very successful tenure, achieving a 25-11 record. Now, at West Georgia, Will Hall’s overall record has improved to 42-14. He can also add a final four appearance (2014) to his resume while at UWG.

West Georgia’s homecoming game really could not have gone any better for the Wolves. They shutout their opponent and only allowed 100 yards , put up 406 yards and 56 points, and many young players got some useful time out on the field. Marcus Sayles blocked his third punt of the year in this game and retuned it for a score. He literally took the ball off the punter’s foot. The video went viral and was aired on ESPN and Fox Sports. This win apparently was not good enough for the people of the D2football.com poll, as West Georgia fell to #3 after the fourth week of the season.

Last Saturday, the Wolves traveled to Livingston, Alabama to take on West Alabama. As I stated previously, Coach Hall coached for three years at UWA. This game was The Wolves’ first real test of the season, and first conference game. West Alabama came into the game the top rushing defense in the nation, only allowing a mere 37.3 yards per game. UWG put that title to shame as they rushed for a combined 124 yards. The score of the game (32-14) does not show how bad the Wolves dominated. They put up 32 points and outgained the Tigers 211-34 in the first half, and scored with their defense, offense, and even their special teams as they have so often. The third quarter was a stalemate where neither team scored. In the fourth, UWA put up two touchdowns. This win is huge for West Georgia. It put them back in #2 spot nationally, and I’m sure it was a little bit sweeter than any other for Coach Hall. 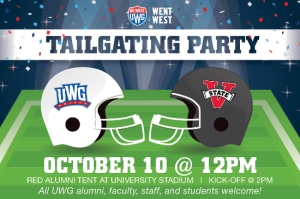 This week, West Georgia returns home to take on the 4-1, 21st ranked Valdosta State Blazers. This is the third meeting of the two schools since Coach Hall took over. Last year, the teams split the series and both games took place in Valdosta. VSU blew out the Wolves in the regular season, but UWG won when it mattered in the Super Region 2 Championship. VSU is coming off a big loss at the hands of North Alabama. The rumor around Carrollton is that this game could be the biggest in University Stadium History. The potential for that rumor to become reality is definitely there.

After the VSU game this weekend, West Georgia will travel to Cleveland, Mississippi to take on 4-1 Delta State, and then will get a visit from undefeated North Alabama. Last year, West Georgia defeated Delta State in the regular season and in the playoffs, but took a loss to North Alabama in heartbreaking fashion. If the Wolves can get through these next three games without any blemishes, do not be surprised if they go undefeated. The last three games of course are not to be taken likely, but look more to be warmup games for the playoffs.

The Wolves special teams units have been nothing short of outstanding this year. Hunter Heck, the kicker, has received GSC Special Teams Player of the Week honors and Marcus Sayles and Telvin Brown have as well, giving players from UWG the award 3 of the 5 weeks. The depth and talent that Coach Hall has in his skill positions is unreal, and they have performed unlike any I have ever seen. Telvin Brown has returned two punts on the year and Marcus Sayles has blocked three. These special teams units are an incredible asset to West Georgia, and are quite enjoyable to watch.

If all you Division II college football fans are not already on the UWG bandwagon, I suggest you hop on now because this team looks as if they will turn a lot of heads this year.

The video of Marcus Sayles punt block that went viral and other information on UWG can be found @ my personal blog Bwrightsports.com