West Georgia advanced to the national quarterfinals Saturday after they defeated Valdosta State by a score of 27-20. This was the second win over David Dean’s Blazers this year, and it gave UWG bragging rights over VSU for the third consecutive game.

West Georgia scored the first touchdown of the day with 3:28 left in the first, and never lost that lead until 5:35 left in the game. VSU hung around though, as they were never down by more than 10 points.

This matchup vs Valdosta was a lot different than the one that came earlier in the year on October 10th. One thing that was the same was that the UWG ground game was clicking on all cylinders. Saturday, UWG rushed for 292 yards with two 100-yard rushers.

Devontae Jackson had another big game as he has so often in his first year at the collegiate level. He rushed for 120 yards on 20 carries, and added a touchdown which came in the first quarter. This TD capped an 11-play, 85-yard drive that gave the Wolves a 7-0 lead.

After trading punts to close out the 1st quarter, UWG got back on the board in the second quarter when Hunter Heck made a 38 yard field goal. This gave the Wolves a 10-0 lead with 9:59 left in the 1st half. They obtained possession on this drive by recovering a fumble that was forced by freshman linebacker Cameron McGee.

West Georgia’s offense then gave up a touchdown to Valdosta after Kenny Murphy intercepted a Dallas Dickey pass and took the ball 79 yards in the other direction for a VSU TD. This was a phenomenal play by Murphy, and the return was even better. He broke a couple tackles before completely stiff arming a UWG player to the ground, then had a clear path to the endzone. This made the score 10-7 with a couple minutes left in the 1st half.

After trading punts again, UWG’s 2-minute offense took over with 1:44 left in the 2nd quarter and it looked phenomenal. They only needed 38 yards to reach pay dirt, but the success they had on this drive made it look like they could have scored from 80 yards out. This drive ended with Dallas Dickey finding Shaq Hall for a 4-yard score with only 22 seconds left in the quarter.

Hall’s catch combined with Heck’s PAT made the score 17-7 as the teams went into the locker rooms.

Valdosta received the kickoff in the second half and was forced to punt. They then got the ball back after the defense forced a punt by UWG. This is when Valdosta’s only solid drive of the day occurred. EJ Hilliard led the Blazers down the field and found his receiver for a two yard touchdown. This made the score 17-14 in favor of the Wolves.

After giving up its first points of the day, the UWG defense was eager to get some points of their own after a perfect punt by senior James Dugan that downed the Blazers on the 3-yard line. The two teams switched sides and the second play of the 4th quarter ended in a safety by Demarcus Davis. This safety extended the UWG lead to 5 points and made the score 19-14.

As the quarter wore on, VSU was running out of chances because UWG was moving the ball on the ground so efficiently.  That changed when freshman Devontae Jackson lost a fumble that was picked up by VSU in West Georgia territory.

Just over two minutes later, VSU found the endzone again with a pass from Hilliard. This time he found his running back Cedric O’Neal for a two yard score. This gave VSU a 20-19 lead, their first of the day, after their 2-point conversion was unsuccessful.

UWG then found themselves down with only 5 and a half minutes left to play. If they were to not score, UWG’s magical season would have ended at the hands of in-state rivals Valdosta State.

(I do not own this footage, credits to Liz Awa)

Luckily, that did not happen because believe it or not, it hurt me a little to type the sentence above^, even though it is not what happened.

Coach Hall stuck with Devontae Jackson on this next drive even after he just committed the fumble and it proved to be a successful strategy as it only took 6 plays for the Wolves to be back on top. A couple of those plays were explosive runs by Jackson.

It was interesting to see how Devontae would respond after the fumble. Not to mention, his team was facing elimination. It seemed as if he had completely erased it from his mind and stayed focus on the task at hand, scoring the winning touchdown. This was amazing to see from just an 18 year old kid, all you young running backs out there should definitely take a page from Devontae’s book.

Dallas Dickey also had some nice runs on that drive, one of which was the go-ahead touchdown. After his 9 yard bootleg, the Wolves had a 25-20 lead with 3:09 left in the game.

As the team lined up, I looked on the far sideline and noticed that Shaq Hall was in single coverage. When I saw that, I immediately knew the play call. There is no way that Coach Hall is going to pass up single coverage on one of the best receivers in UWG history.

Sure enough, I was right as Dallas delivered a perfect floater to the corner of the endzone where only his fellow senior Shaq Hall could catch it. This successful conversion made the score 27-20 with 3:09 left.

Even though VSU’s offense had hardly done anything all day, one could feel the sense of worry that came over the UWG faithful when VSU took over.

VSU gained only a couple yards on this last drive as they were swallowed up by defensive force Dylan Donahue on pretty much the last play of the game, ending the Blazers season.

They had a chance, though. EJ Hilliard had a wide open receiver moving down the UWG sideline but he overthrew him. When I say wide open, I mean WIDE OPEN. The UWG secondary blew the coverage as the corner stayed in the flats and the safety never moved over the top. Carlos Hutton, the starting safety, was not in the game due to a hit he suffered earlier in the quarter.

After this drive, UWG took back over and used a couple kneel downs to end the game, and the Blazers hopes at a 3rd national title in 9 years.

Dylan Donahue showed football fans everywhere Saturday that he deserved to be considered for the 2015 Gene Upshaw Lineman of the Year Award. He made the last list of 8 finalists, but was not given the award as Grand Valley Sate’s Matt Judon claimed it. Dylan ended his day Saturday with 3.5 sacks in the game. EJ Hilliard could not get away from Dylan all game. Not only that, but he had the sack at the end of the game that sealed the victory.

“I want to hand all the credit to Jason Carr and Marion Holmes and some of our other inside guys, as well as Alex Armah. We’re just a tenacious defensive line and to be part of that makes this a lot easier. If it’s not me making the plays then it’s one of them, and if it’s not one of them then it is someone else.”  –Dylan Donahue

Marion Chapman led the defense with 9 tackles on the day, 1.5 for loss. Donahue ended with 8 tackles and 3.5 sacks, 2.5 came in the second half. The defense only allowed a total of 282 offensive yards on the day and held VSU to 8-16 on 3rd down, which is above their 29% opponent average. As a whole, the defense allows 15.3 points per game, and have only give up 20 touchdowns.

Dickey ended the day with 14 rushes for 100 yards and a score. Through the air, he finished 8-of-19 for 77 yards and a score with one interception. Devontae Jackson now sits at 910 rushing yards on the year on only 126 attempts. It has been a while since he has not rushed for more than 90 in a game so I see him eclipsing that 1,000 yard milestone Saturday.

West Georgia will face a 10-2 Tuskegee team this Saturday at University Stadium. Last year, UWG defeated Tuskegee 20-17 at Tuskegee. This was the first game of the 2014 DII playoffs, and was the first playoff win in Division II history for West Georgia. UWG was the 6 seed from Super Region 2, while Tuskegee held the 3rd seed. This year, Tuskegee is the 6th seed in our Super Region, and we, of course, are the one seed.

Tuskegee’s Coach, Willie Slater, was the offensive coordinator at the University of North Alabama from 1992-1999. During that span, the Lions won three National Championships in a row from 1993-1995. They are still the only team to have accomplished that. 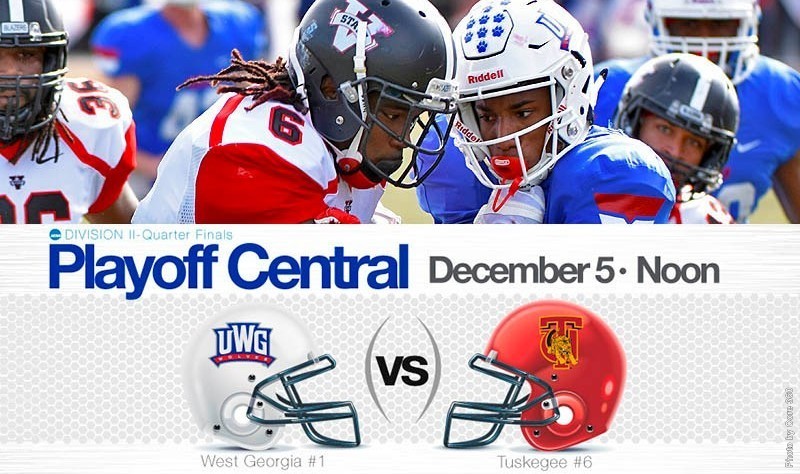 Tuskegee and UWG have a couple of common opponents on the year. The Tigers beat Catawba and North Alabama in the first two rounds of the playoffs, UWG defeated them in the regular season. Also, Tuskegee defeated Clarke Atlanta 26-0 in the first game of the year, a team UWG beat 56-0 on Homecoming. Lastly, Miles defeated Tuskegee 26-23 in the final game of the regular season. UWG defeated Miles 33-7 week 2 of the season.

All the stats and performances point to UWG coming out on top, but it is the playoffs now. Anything can happen. We all saw that last year as UWG made it to the final 4 as a 6 seed with a brand new head coach and an injured roster. Saturday, UWG will be very eager to get back to the final four, where they were eliminated last year by the eventual nation champions, Colorado State-Pueblo.

We need the UWG faithful to show up and show out Saturday as their attendance could have an effect on where the final four game is played, if we were to make it. Once you get to the final four, seeds are thrown out. The two schools facing off in the playoffs submit a bid to the NCAA explaining why their school should host the game. Last week, there were 7,126 people at University Stadium watching the rivalry. This is the second most all year for UWG. The most came against Miles in the home-opener.

Last week was also Thanksgiving break for colleges. So, many students/faculty members were still at home or out of town and could not make it to the game. This week, all those students/employees will be back in town and will hopefully make their way to the game. I encourage you all to do so.

Having 7,000+ at our two playoff games would be great to add to the bid. It could go alongside being located very close to the busiest airport in the world, and a new and improved tailgating atmosphere.

So it is in your hands UWG fans, make sure you show up to the game at noon Saturday and make some noise. Tickets will be $15 at the gate, $10 for students.

Here is a link for ticket purchasing times/dates and details.

Here is a link to the updated 2015 Division II playoff bracket.