The West Georgia Wolves improved to 4-0 on the year last Saturday after they defeated the Albany State Golden Rams by a score of 27-23. After just four weeks, UWG has faced three teams that made post-season play last year with Albany State being one of them.

The 27-23 victory did not come easy for the Wolves just as the Delta State win did not come easy. However, Coach Hall’s team was able to stand up to the adversity brought upon them by the Golden Rams and the 6,474 people in attendance.

ASU received the opening kickoff and were only able to manage one first down before being forced to punt. As the punter caught the snap and began to take his steps, he saw senior CB Marcus Sayles out of the corner of his eye and tried to make a run for the first down. Marcus will not be credited a block for this play, but he is solely responsible for making the punter ditch the kick and try to make a run for it.

Sophomore LB Cam McGee made the stop and it gave the UWG offense the ball on the ASU 37 yard line. 6 plays, 37 yards, and one minute forty-seven seconds later the Wolves were in the endzone with a 7-0 lead. Junior QB Will Gardner hit sophomore receiver Qa Walker on this drive for a 23-yard gain, which was where the bulk of the yardage came from. Senior RB Lamarcus Franks finished it off with an 11-yard touchdown run and it gave his Wolves the 7-0 after the PAT with 11 minutes left in the 1st quarter.

UWG’s defense could not contain the Golden Rams on the next drive as they took the ball 75 yards in 13 plays. The drive ate up 5 minutes off the clock and it made the score 7-7 with 6 minutes remaining. The defense was able to force a fourth down try mid-way through the drive, but it was converted and the drive was extended.

After the ASU touchdown, sophomore RB Devontae Jackson received the ASU kickoff and took it 97 yards for a touchdown. This was the 3rd longest play in school history and was the first UWG kick return for a touchdown since 2014. The extra point attempt failed and this made the score 13-7 with 5:38 remaining in the 1st.

Unfortunately for UWG fans, Albany State would respond on the ensuing drive with a touchdown of their own. They used two 3rd down conversions on the 8-play, 73-yard drive. Their extra point was converted and it gave them a 14-13 lead over West Georgia. 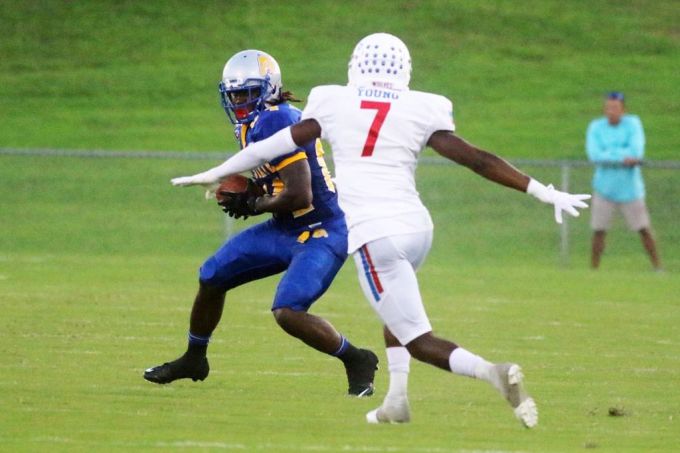 UWG made a mistake on the next drive as Albany State recovered a fumble on the West Georgia 27-yard line. Luckily, the first two ASU plays were incomplete passes and then senior LB Chris Harthorne sacked the quarterback on third down for a loss of 12 yards. This moved them out of field goal range and forced them to punt it to the UWG offense.

West Georgia was able to convert a couple of first downs on this drive, but were forced to punt after a 3rd-and-1 rush attempt was stopped short. This gave Albany State the ball with 14:08 remaining in the 2nd quarter.

The defense then came up huge on the next drive as senior safety AJ Leggett intercepted an Albany State pass on 3rd down and took it 32 yards for a pick-six. This is Leggett’s 3rd interception on the year and he has only played in 3 of the 4 games. He has been a huge force for the UWG secondary this year. This touchdown gave UWG a 20-14 lead with 12:42 left in the opening half.

The defense then stepped up again and forced Albany State to punt it back to Will Gardner and the UWG offense. The two teams then traded punts twice, and West Georgia found themselves with the ball again with 1:55 left in the half. This time, the drive started on the ASU 39 yard line.

Two penalties and two completions to Qa Walker later and the Wolves were in the endzone again. The touchdown came from a 2-yard catch by Walker, and it gave his Wolves a 27-14 lead over Albany State heading into the half.

Unfortunately for the UWG faithful, they would not put up any more points in the second half. However, it was still enough to win the game. The 2nd half started with UWG failing to convert a 4th down attempt and Albany State taking over. The Golden Rams then mounted a 6-play, 65-yard scoring drive that made the score 27-21 early into the 3rd quarter.

Will Gardner and the offense then ate up 8 minutes off the clock and moved the ball all the way inside the ASU 5-yard line. Then, disaster struck as a Will Gardner pass was intercepted in the endzone and returned to the Rams 20 yard line.

The next Albany Drive was stopped by senior DE Dylan Donahue sacking the QB on 3rd and 12. This forced the Golden Rams to punt it to the Wolves with 10:12 remaining in the game.

UWG then mounted an 11-play, 61-yard drive that set up a 41-yard field goal attempt by sophomore Eric Autry. The attempt was wide-left and this allowed Albany State to take over with 5:12 left in the game.

The defense was not to be denied on the next drive as they forced a 3-and-out and a punt. This next drive would be crucial for the Wolves as they could effectively end the game with good clock management.

Coach Hall had to have been furious with his guys as this drive started off with 3 consecutive UWG penalties that forced them into a 1st-and-40 situation. A couple plays later, it was 4th-and-27 and UWG was lining up to punt. This was a tricky situation, though.

There were 9 seconds remaining on the clock for this fourth down play. Coach Hall was faced with the decision of punting the ball and possibly yielding a game-winning punt return/block touchdown, or trying to run around for 9 seconds to kill the clock. Needless to say, this was a real nail-biting moment for all UWG fans streaming the game online, including myself.

When UWG punter Jordan Ikner caught the snap, he immediately turned around and ran backwards giving up an automatic safety. This left 3 seconds on the clock and it made the score 27-23. Coach Hall had more faith in his kickoff team than he did in the punting unit.

Now, all West Georgia had to do was stop the kickoff return team from putting any points on the board and the game would be over. This was much easier said than done, though.

Albany State pulled out all the tricks on the return as they started to do the laterals. The play seemed as if it went on for several minutes. Multiple laterals were made and there were a couple times where it looked like they may have had a lane. Cam McGee and West Georgia’s kickoff team were finally able to make the stop and the game ended with the Wolves on top, 27-23. It may not have been the prettiest win, but the Wolves went to bed still undefeated that night and that’s what matters.

UWG remains #3 in the American Football Coaches Association Poll and they keep their #2 ranking in the D2football.com poll.

Will Gardner finished his day 17-of-29 for 214 yards with one touchdown and one interception. He has now thrown for 839 yards and 7 touchdowns on the year. Devontae Jackson was the leading rusher on the day with 11 rushes for 65 yards. Lamarcus Franks added 12 carries for 40 yards and a touchdown. UWG still has not had a 100-yard rusher this year, something they did have in 7 of 14 games last year. Two of those games had multiple 100-yard rushers.

This is the only game of the year so far the West Georgia has been outgained in terms of yards by their opponent. The defense yielded 367 yards and the offense only put up 275. A huge reason for this low outing is the loss of roughly 40 yards on the play that resulted in a safety as well as Devontae Jackson’s kickoff return which is not accounted for in total offense. Jackson’s performance on special teams also earned him the GSC Special Teams Player of the Week Award. UWG has now claimed this award two weeks in a row.

The defense forced 5 sacks on the day. Three of the sacks came from All-American Dylan Donahue, while the other two came from Chris Harthorne and sophomore Demarcus Davis. They also had an interception returned for a touchdown for the second time this year.

West Georgia will now travel to the University of North Alabama to play the team that they split the conference title with last year. North Alabama is currently ranked #18 in the AFCA Poll and #6 in the D2football.com poll. They are 2-1 on the year with their only loss coming to Division 1 FCS opponent Jacksonville State. West Georgia defeated North Alabama 31-10 last year in what was the GSC game of the week.

UWG will need to play way better this week as North Alabama is a much better opponent than Albany State. I have complete faith that Coach Hall will fix all the kinks this week in practice and have his guys ready to play. This game is going to be a close one.

This year’s North Alabama matchup is also the GSC game of the week and it can be watched online on ESPN3. Live audio can be listened to by clicking this link or tuning into Kiss 102.7 on your radios.

Head on over to Bwrightsports.com this season for all things West Georgia as well as local high school sports.

Thanks for reading my recap of the game, Go Wolves!

***The only pictures that I own in this article are the ones with my initials in the bottom right corner. The others are owned by either the UWG Athletic Department or the Albany-Herald.***