Catching up with the Amazing Parks Sisters

Man, it’s been awhile, but I’m finally back at my blog with more details about Mikayla Parks, who is now 11, and Alycia Parks, now 10. The Parks family has been living in Florida for just over a year and the Parks Sisters have been turning heads and raising eyebrows wherever they go to train. Perhaps one of the biggest highlights came last October, when they met one of their heroes. The girls, along with their dad, Michael Parks, visited the Barnes and Noble bookstore in Palm Gardens where WTA superstar Venus Williams was signing copies of her book, “Come To Win.” Williams’ eyes lit up when she saw the family approach her table. “Mr. Parks?” she asked, confirming this was indeed the Parks family. “Yes,” he answered. Then Venus leaped from her seat to give Mr Parks and the girls big hugs! “Oh my goodness,” she said as finally met the tennis-playing sisters she’d heard so much about. “They are beautiful, and very strong,” Williams said, who had been given a head’s up to expect a visit from the sisters during her book signing.  The tennis legend had seen pictures of Alycia and Mikayla and even heard their voices by phone, but had never met them face to face.  Clearly the youngsters impressed Ms. Venus, who couldn’t take her eyes off them. She presented them autographed copies of her book.  Mikayla, who I’m told is a huge fan of Venus, started reading the book immediately. It was a meeting that the Parks Sisters will long remember. 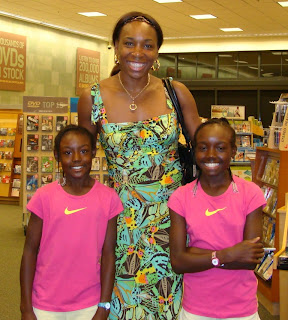 Meanwhile, on the court, Alycia and Mikayla have seen their abilities soar after a year of working with some of the nation’s top coaches and instructors. A visit to their old haunt,”Racquet Club of the South,” for a USTA Regional Level 2 showcase only confirmed what many had believed. Bill Ozaki, Director of Programs and Player Development for the USTA Southern Section, was pleased with what he saw as Alycia and Mikayla showed a mastery of all the strokes, with serves that clocked around 90 miles per hour. Mr Parks told me those serves sound like a rocket going off ! The sisters also showed off the ability to hit a swinging volley which is a difficult shot to execute consistantly. Oh, and by the way, the showcase in Norcross was for the top junior players in the region, ages 12 to 14. Remember, the Parks Sisters are only 11 and 10. It was also dertermined at that time that the girls would begin tournament play early this year and that’s been a success so far. The sisters combined to take the doubles title with an 8-0 score in a 12’s tournament. Then it was on to the Polo Club for their first singles tournament playing in a year and a half. It was a 14’s tourney and Mikayla made it to the semifinals, while Alycia finished the job beating the second seed 6-0, 6-0 and then taking down the top seed 6-2, 6-3. The 14’s is where the Parks Sisters are expected to play most of their tournaments this year, and they’ve already served notice they won’t just be satisfied with playing well. They are coming to win.
The month of March started with a trip to Bradenton, Fla., to work out at the IMG Bollettieri Tennis Academy under the watchful eye of tennis guru Nick Bollettieri. It was the sisters’ second time visiting the Bollettieri Academy and the man known for his expert eye for tennis talent was very pleased with their progress. There’s a chance this could mean more trips to IMG in the future. I’ll keep you up to date on all the latest.  In the meantime, be on the lookout for next issue of USTA magazine. It will feature a story on the Amazing Parks Sisters! This could be an interesting spring and summer – very interesting indeed.
Share. Facebook Twitter Pinterest LinkedIn Tumblr Email